When you are travelling to a new destinations, you usually have some anticipations of the place, expectations of what you’d see there. But that was not the case with Mexico City for me. I only decided to make a stopover there to not waste time at the airport, as I needed to make a transfer there anyway, so I decided to stay overnight and get the feel of the city. I didn’t expect much – I didn’t expect anyhting at all. I was even a bit anxious – friends were telling me to be careful as they’ve heard it to be not too safe.

I arrived at around 7 pm, and called an Uber. The app told me it’ll be around 50 dollars, and I thought it’s a bit too expensive for Mexico – the hostel in the city centre was only 20 minutes away. But then it turned out it was Mexican pesos, which equalled… 3 USD!

It got dark by the time we got to the downtown, and having been frightened before, I didn’t feel it’d be safe to go for a dinner on my own but with such Uber prices I can just get a ride to the nearest restaurant. Though at the same time I spotted unexpectedly big number of places of interest around – cathedrals, palaces, monuments. “Will have something to explore tomorrow”, though I.

When I entered the hostel, I noticed a girl of approximately my age with a huge backpack checking in. SHe looked like a solo traveller and I didn’t think long before I harassed her with “Do you want to go and have dinner?!” I didn’t expect that from myself and then thought it might have felt weird, but later Karina told me that she was happy I approached her, as she had exactly same thoughts in mind. That’s what I like about staying in hostels – you can make friends easily and people won’t think you’re a weirdo. Or, even if they do, they might even appreciate it.

We went to a taco place nearby, and the neighbourhood turned out to be much more friendly and not hostile at all – nothing like what I’ve imagined. Another proof that it’s normally much safer in most places people would watn you about (especially people who have never been to the places in question). We were both tired after the flight, so headed back to the hostel straight after dinner, but agreed to go sightseeing together the next day.

And that’s where the surprise was – I would never expect Mexico City to be so rich in places of interest! Museums, galleries, exhibitions, churches and cathedrals – every square meter is inhabited with a building which will evoke your curiosity! I have read nothing about this city before coming here, it was just a stopover for me, and I felt that half a day is more than enough. I knew there were Mayan piramids, but they were off the city center and I didn’t risk to travel there (which I was very happy about, since I’d see Mayan ruins further on my way, but not the grandeur and beauty of the Mexican capital!)

This story will be more in pictures than in words, as to my shame, I know nothing about the places I’ve seen or visited. And since I didn’t have much time, I only watched them from outside, so no stories told. But the sites are a pleasure to the eyes and a true aesthetic delight!

Amazing architecture of palaces, cathedrals and such:

Does anyone know what is the meaning of this sculpture? I tried to find it on Google, but failed: 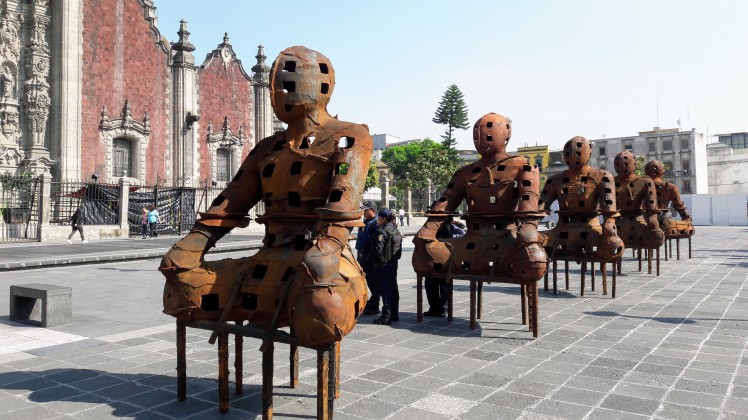 I’m not a big fan of churches, but Mexican churches interiors impress by their grandeur and luxury!

There are Chinese quarters in every city!

And lots of tiles!

If you walk for about 15 minutes away from the main sightseeing spots, you’ll see a very different Mexico City – very modern, with skyscrappers, spacious.

And if you climb this dome:

you’ll get a fantastic 360 panorama of the city!

If you are a museum lover, you need to allow plenty of time for this city, as there are a lot, not to mention some places of interest which are slightly outside of the city, such as Teotihuacan Pyramids or Xochimilco lake – unfortunately, I didn’t have time to visit those, you need to spend at least one full day there.

Be also prepared to the fact that almost noone speaks English! Actually, the only person who spoke perfect English that I’ve met was a homeless asking for money…

Next time I’m in the region, I’ll definitely give myself more time to explore Mexico City. But for now that was it. Next stop – Cancun!